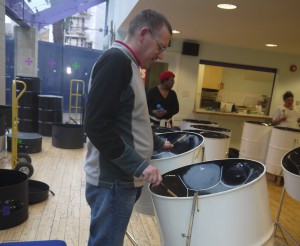 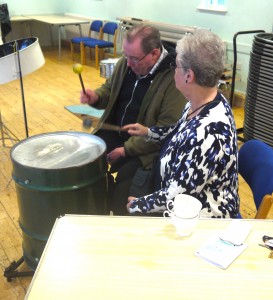 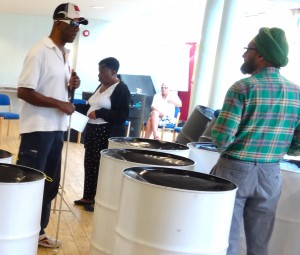 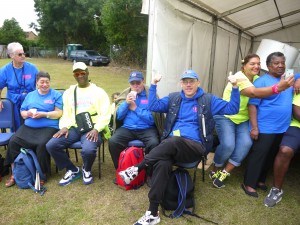 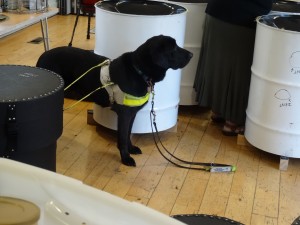 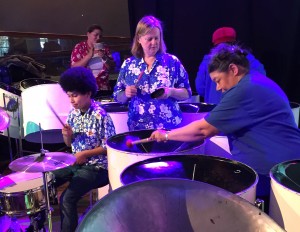 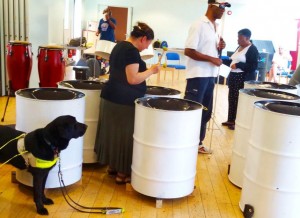 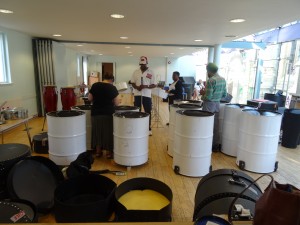 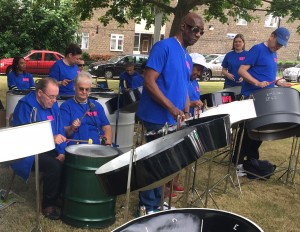 The class is now in its second year and is going from strength to strength.

Thanks to funding from Arts Council England we were able to ‘pilot the Pilots project’ and cover the access costs for our summer project, then a small grant from RBKC Arts enabled the Pilots to develop a set and take part in more gigs. We were also helped by the Greggs Foundation to keep activity going through the winter months! The results can be heard in the music… Michael’s arrangements of well known tunes like “Monkey Man” and “The Lion Sleeps Tonight” played by the Pilots creates an ‘old time pan sound’ that everyone says makes them feel happily nostalgic and uplifted – at times audiences have responded more joyously to the Pilots’ set than to the modern soca tunes played by the rest of UFO!

Everyone in the Pilots has told us how meeting weekly, learning an instrument and playing gigs has been life changing – some say this activity has taken them out of isolation and depression: “Its not just the music; its about the social activity of being in a band and all working together.” The able bodied UFOs say they have learned so much form having a blind/visually impaired section. Some told us they had never actually met a blind person before, and they have got now over their inhibitions and misconceptions and have learned so much about how to support this disability, and how to be more thoughtful and proactive about disability in general. One young player commented “I realise now that if you are blind, you can still see… you just don’t see with your eyes. I realise Michael uses many other senses to know me – he knows how I breath, how I enter a space. He knows my scent, and how I sound when I come into the room, how I walk and put my feet on the floor, how I stand. He always knows it’s me.”

Indeed there have been teething issues… as Michael says, “Its the blind leading the blind!” It is a challenge setting up steelpans at the best of times – they are heavey and cumbersome, yet need to be treated so delicately. To an untrained person pans all look alike – it’s so easy to mix up a tenor and half of a double tenor, a side of a double guitar and a side of a triple guitar, and to set them up all wrong. Making the room and the classes work for VI players requires absolute precision and much care – there can be no mistakes. One player said, “If you are sighted you can see if you’ve set up your double second the wrong way round – and its pretty easy to do. But if you can’t see, you can’t tell, and Michael the teacher also can’t tell, so it can take a while to work out what is going wrong with the sound.”

We started out having Michael’s support worker Ian helping set up, but Ian is not a pan player – its his job to help Michael get to and from the lessons. Realistically we could not expect Ian to learn every fine nuance about setting up steelpans for a lesson, when he does not actually play the instrument himself – it is not easy for an experienced player to set up a steelpan room correctly… and find the right sticks for each pan. Pan sticks may all look similar but in fact they are so diffierent and it is important that the right sticks go with the right pan. Ian continues to be a great support in the class, but we have had to put in two additional workers who are also pan players – they know that crucial bit about how to support Michael’s teaching, and can provide expert care, for example, when Michael cannot see if someone is holding their hands too high, or is even standing on the wrong side of the pan, which can happen in this class. Even if Noula knows that one of her tenor bases needs turning 10 degrees clockwise, it is not easy for her to move it herself  as the pan is placed on a stand that could easily topple.  Similarly when someone drops a stick – which pan players know is easily done –  it can be impossible to find without sighted support in the room.

With Michael’s expert tuition, and with the support in the class, the VI players are now making beautiful steelpan music. We have had a lot of laughs on the journey of getting to know how ‘blind and visually impaired steelpan’ works, but it has made UFOs a stonger, better, happier community. We very much hope that more income via performances and subs – or the grant funding we are applying for – will come in to help us to ensure that we can keep the support in the class, and can keep the class going, and can offer it to more people.

Our ambition for 2017/2018 is to have most of our VI players on the truck for Notting Hill Carnival and the London New Year’s Day Parade… and to have more blind/VI UFOs.