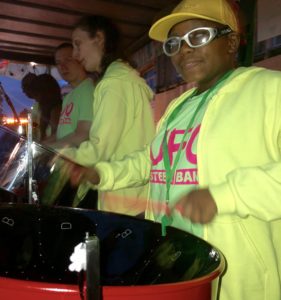 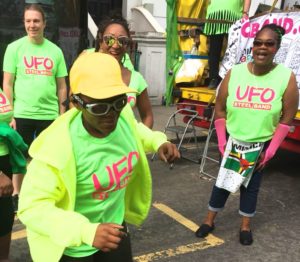 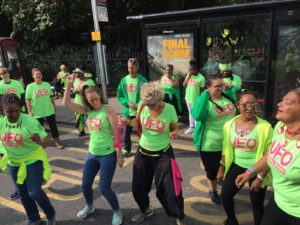 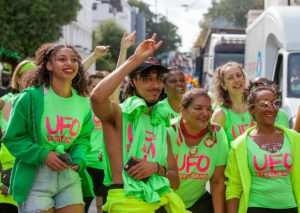 If you read our other blog on this link it tells the story of how UFO developed a visually impaired section.

We initially named the section the ‘UFO Pilots’… but that name fell away when another naturally took over and stuck. Michael wears a ‘Visually Impaired Person’ badge out in the public everyone knows he is blind and helps him if he needs it… so we soon found ourselves referring to  ‘The VIPs” and the name just stuck. So we have UFO and within it the UFO VIPS…

And there has been an update: we are proud to say that we have disbanded the VIP ‘section’ and become a totally inclusive band with everyone together in the one class… Jason teaching on Monday nights with Michael mentoring and supporting the VIPs within the class, but we play as one band.

For Carnival 2018 we had on the road on our truck 3 visually impaired players including 12 year old Tango – who is completely blind – playing his first ever Carnival! We also had two hearing impaired players, and another player on kidney dialysis – and we made it work and Carnival was so much fun.

Click the link to see a one minute film that captures the spirit of  UFO at Carnival   (Made by double guitar player Ajay – thanks Ajay!)

And here is another made to end Michael and Fiona’s talk – delivered at the International 7th Biennial Steelpan Conference – entitled “The Blind Leading the Blind – Making Difference Work in UFO Steelband.”