Pan in a Pandemic… UFO Surviving and Thriving During Lockdown

We were all aware of the growing pandemic but because one of our players was from Hong Kong, we were getting realistic updates… Hong Kong was already in lockdown, everyone was wearing masks… there were even robberies for toilet rolls!

It was soon the same story in London…

UFO realised that if we went into lockdown there would be no access to instruments… but that seemed a waste of resources. Indeed steel pans are delicate and expensive and most steelbands do not loan them to players, but we thought: why keep them in storage for an indefinite amount of time when they could be used to make music in people’s homes?

We had exactly one day to work out a plan with our insurers and draw up a free loan agreement. We then created a 4 hour time slot when players could pick up instruments and stands, or we could drop these to players who could not get to the panyard.

Then to work out zoom…

Colin, Fiona and Jason trialed a music session and we discovered that with the lag, there is no way that people in a class can actually play together… so the videos of bands and choirs appearing in the zoom format all over social media were simply the result of clever editing rather than musicians playing in unison…

We realised that only one player at a time can play, but all the other panists in the zoom can benefit by playing along – which works – as long as they are muted. Jason soon sprung into musical maestro action and made a WhatsApp homework group, creating and posting backing tracks so players could have something to play along with when practicing at home. Then in class when it was their turn to play, they could run the backing track on a speaker and everyone else on the zoom could hear that player playing with accompaniment. This was less daunting for the solo player, and great for everyone else who was muted – they played along with something beautiful, which was stretching but effective for learning. 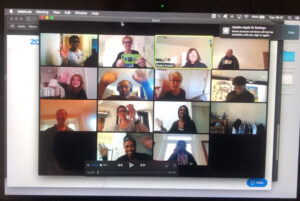 Click here for a mini look at our very first zoom lesson:IMG_5643

We soon realised the advantages of UFO lessons on Zoom:

– Participants played even more intensely than they would have in live class. Normally steelband sections must wait silently while another section is being taught, which can mean you can spend long parts of panyard lessons just listening… but in zoom lessons you can play intensely for a full 90 minutes, getting in valuable practice…. as long as you are muted!!

– We started learning tunes more quickly, so when we did come out of lockdown it took no time to make tunes work as a band – how exciting was that!

– We learned so much about lighting for film, recording, editing and zoom boardcasting.

Our first concert was a live recording for Notting Hill Carnival Reimagined online. We managed to put a small group together… even thought the recording was socially distanced, some of our participants  – especially those who were shielded – could not take part. The event took place in a professional studio and we loved the experience, and having the chance to have our performance broadcast across the world, as well as share it with our shielded players. Here is the link: https://youtu.be/xbOWRgOKMfk

Our next event  – during Notting Hill Carnival weekend  – was a socially distanced concert that was part live (in a street in Shepherds Bush) and part  Zoom (from a back garden nearby) and brought the spirit of Carnival into the homes of isolated and shielded senior citizens, working with AGE UK… the beneficiaries gave us great feedback and it was great to see them dancing along wearing the carnival headdresses they had made earlier in another AgeUK carnival workshop. 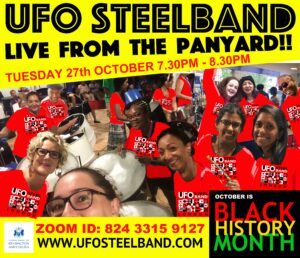 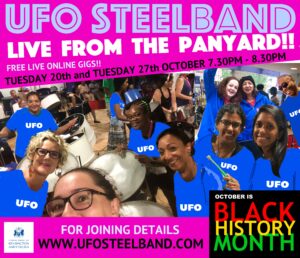 Next came a series of three gigs in October – these were “Live from the Panyard” sessions for Back History Month, enabled by a £500 small BHM grant from RBKC Arts, which we used to purchase cubase and music equipment to assist Jason’s musical production. We tasked all players with helping with the narration, and even though most people had never spoken on camera before, they learned… and over the three concerts they excelled. We learned  many new skills around lighting, recording, broadcasting and editing videos, and we were very proud of what we were able to create and share on youtube…and live Zoom Broadcast: https://youtu.be/HvILVaqC74E

The finale was our Christmas concert… we organised it in just one day before second lockdown happened, and we loved every minute of getting together to play  – again it was a very small group, but it felt like a true testament to to resilience and the joy of making music, even when people are suffering hardship, disability, and the pain and loss that the pandemic brought to so many people across UK : https://youtu.be/fzPs3bzxalQhttps://youtu.be/fzPs3bzxalQ

We applied for many hardship grants during the pandemic but won none…. just too many arts projects and not enough funds to go round. The saddest thing this meant was that we did not have the funds or resources to offer the support needed to keep our visually impaired players throughout zoom… that is something to look forward to when we are (hopefully) out of lockdown and everyone had had their vaccinations…. onwards and upwards UFO!