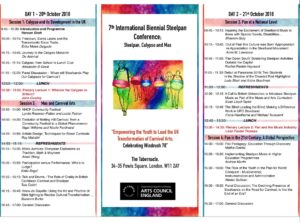 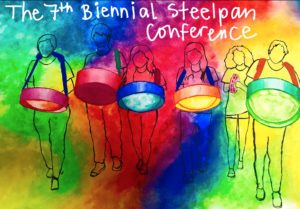 In October 2018, Fiona and Mike were invited to speak at The 7th International Biennial Steelpan Conference, held at the Tabernacle London W11.

Their  talk was entitled: “The Blind Leading The Blind – Making ‘Difference’ Work in UFO Steelband” 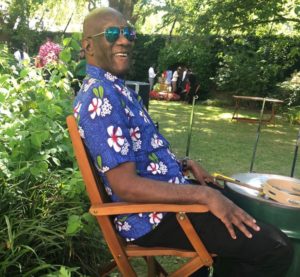 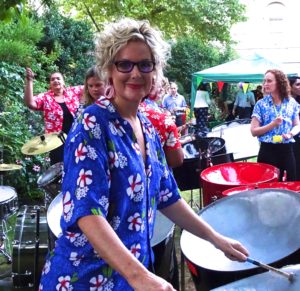 Below you can read the “Abstract” they wrote for the Conference Booklet, that will be sent to 4000 people worldwide:

THE BLIND LEADING THE BLIND…

By Fiona Hawthorne and Michael Toussaint

UFO Steelband started 5 years ago in a church hall in Ealing, with a handful of instruments, much intrepid enthusiasm, and a desire to create something that somehow broke the mould.

Fiona brought energy, ideas and creative direction. Jason brought musical experience, exciting arrangements and very patient teaching, and it wasn’t long before Jason also brought Michael, his longtime “partner in pan”, already well known in the steelpan world as the only blind tenor player anyone had ever seen. Michael’s words “BUT I’VE RETIRED FROM THE STEELBAND WORLD!” were soon joyously overruled by the band.

Practicing our set for our first Carnival in 2014, watching Michael’s tenor sticks dance over his pan making beautiful music, Fiona thought, “If Michael can, other blind people can too.” And it turned out that creating ‘the world’s first Blind Steelband’ was already Michael’s Dream. So UFO started our ‘mission impossible’.

Indeed it would require support, and we luckily found “Unlimited” a fund aimed at supporting the work of disabled artists. But after many arduous hours of idea development and application writing… we didn’t get the grant. The silver lining was that the failed application helped hone our vision and so we applied to the Arts Council of England, this time with scaled down expectations… would they, in funding the UFO performance season which included Notting Hill Carnival, the Mayor’s Thames Festival and many community gigs – also fund just two visually impaired people to join UFO, and be supported to become pan players?

Thankfully, we got the grant. But Michael’s mission to recruit via the local social club for the blind in Ealing led to a problem… there were 8 visually impaired people who wanted to join and we only had space for two, so – knowing how hard it can be for steelbands to keep players – we took on all the new recruits, thinking the majority would probably drop out.

But they didn’t. As Michael said, “We’ve now got a class with the blind leading the blind.”

One of the joys was the recruitment of  Bill Lambe who played dudup, beating ‘on the one’ with his wife Murial’s hand held over his. Now aged 75 Bill has dementia as well as deteriorating vision, but when he becomes part of a band making music, some of his lost memories come back… memories of being in the MET Police in the very early days of Notting Hill Carnival, when he knew Rhaunie Laslett and Sonny Blacks and the youth steel bands back in the day, and he remembers his love of steelpan, and how he would love to play in a steelband… and now does.

The last four years have indeed brought challenges. Sighted members of the band have had to develop their own confidence to learn about disability, and visually impaired members – known in the band as “The VIPs” – have had to work on developing trust so they can help. There have been funny moments, wondering why the notes don’t sound right and realising it’s because the player is behind – not in front of – the pan. There have also been many moments of joy, like when our latest new recruit, 12 year old Tango – who is completely blind – played his first Carnival on the UFO truck and grinned from ear to ear as he felt the elation and delight that playing pan on the road brings. Every gig we’ve played has included visually impaired and hearing impaired members – and we’ve all appreciated how lucky we are to be able to lift people with music, whether it’s playing for the homeless at Crisis for Christmas, or even getting the limbo dancing going at the staff party at No. 10 Downing Street.

UFO may not aspire to competing against other steelbands and winning any musical crowns, but we play twice a week all through the year, are developing our own unique sound and style, and are certainly having so much fun… making music and creating new methodology in the process of becoming genuinely inclusive. If we can help show other bands that ‘difference works’ we feel that would be a major achievement and could help strengthen the steelpan community, and we are up for that.

To close the talk, Fiona made this 3 minute film – we hope it gets across the joy of being an inclusive steelband.